How Poke Became The New Sushi 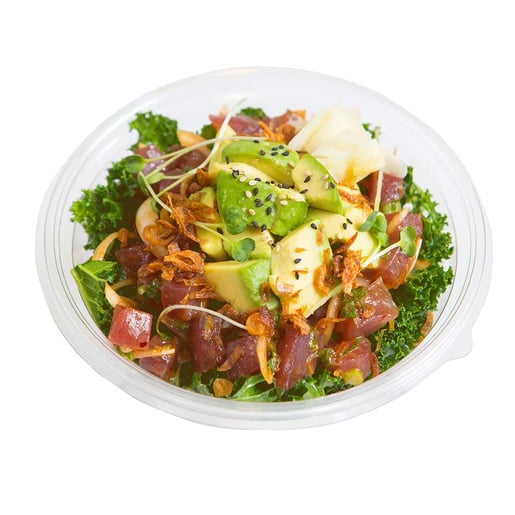 Once sushi burst into the mainstream in the 1980s and 1990s, it never really went out of style. Who can resist the allure of perfect raw fish, beautifully presented? Very few people we know.

So it's little surprise that poke (pronounced poke-eh, not poke or poke-eee) has recently become such a hit. In fact, it's more of a surprise that the dish took so long to catch on.

A Hawaiian staple that's just now gaining widespread popularity in the Lower 48, poke is simple, at heart: raw chopped fish (tuna is the most common), usually seasoned with soy and sesame seeds, usually served over rice and garnished copiously, with with avocado or scallions or cucumbers or just about anything else under the sun. Poke actually translates to "section" or "cut," so just about anything served in chunked-up form can be a poke.

But when you think of poke, you're thinking of seafood. In a way, it combines many of today's American obsessions -- it's a "clean" dish with not much added fat and tons of protein, with the opportunity to throw plenty of vegetables on top (even today's poster child for all things Instagram, the avocado).

Whereas a few years ago, poke was only familiar to food obsessives or those with a connection to Hawaii, in the last year it's become far more popular across the United States. Sweetcatch Poke Bar is an entire outfit dedicated to the dish, with two locations in New York's Midtown Manhattan. In Southern California, you'll find dozens of similar operations -- from the casual roadside spot Jus' Poke in Redondo Beach, to Ohana Poke Co. on Sunset Boulevard and the highly customizable Wiki Poki in Koreatown.

And now that chefs have discovered poke, plenty have put their own spin on the dish, not stopping by putting forward a simple bowl. At Saltyard in Atlanta, you'll find salmon “poke” tacos -- wrapped in wonton wrappers and served with sesame aioli and roe. At Manhattan's Mulberry Project, there's the Tuna Poke Tostada, with seasame, soy, pineapple, and avocado.

Purists may look askance at these takes on the classic dish, but there's no denying that each one is a reflection of poke's sudden popularity. And while food trends come and go, poke is one that might stand the test of time. Raw fish, served in ample quality, seasoned and beautifully presented; what's not to love?