All About SPiN, Our Favorite Ping-Pong Club 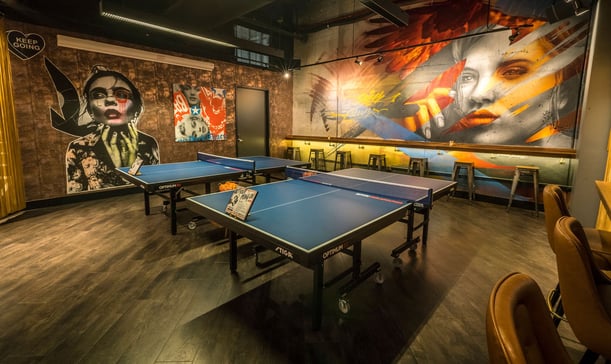 It’s a social club. It’s a bar and restaurant. It’s a party. SPiN is a venue unlike any other — a swank ping-pong club with the aesthetic of a hip urban bar crossed with a classic rec room, the energy of the hottest nightlife in town, and the camaraderie of a sports league, all in one.

First opened in New York in 2009, SPiN soon attracted a crew of celebrities and notables all after something different from yet another nightclub. The wildly popular venue then expanded to San Francisco, Los Angeles, Toronto, and Chicago, and now features a new club in Philadelphia -- and more to come in Seattle and Austin.

In Philly, the Center City venue boasts 12,000 square feet with 17 ping-pong tables, a DJ booth, graffiti murals, scratch-and-sniff cherry wallpaper, and the "Red Room," an entirely red space with its own ping-pong table. For eats, SPiN offers up an enticing menu of sharable eats (hello, Mac & Cheese Quesadilla!). Cocktails are smart and modern, like the “That Gin Jawn” with Hendrick’s, Cointreau, lime, and thyme-basil syrup. Other clubs have already become fixtures on their local scenes; in Chicago, SPiN’s 20 tables have been going strong for more than a year, with equally compelling eats and drinks.

And while SPiN is a great hang even for small groups, it’s one of the best venues we know for larger events. What better to get a party going than a little friendly competition? With DJ capabilities, a stellar kitchen, and endless entertainment, SPiN is utterly unique in every city where it’s landed.